In media terms, August is traditionally referred to as the ‘Silly Season.’ The term was first referenced in 1861 as a time when, due to the closure of Parliament, there was an increase in media reports of strange and relatively confounding news items.

This year’s silly season was no exception and there were four stories that, for me, fitted that label.

First up, the report that Baillieston teenager, Emma McNulty, was sacked for failing to turn up for work as she was upset at the death of her pet dog.  So upset she was, it spurred her on to demand a legal right to pet bereavement and saw her launch a petition to demand bereavement leave at work following the death of a pet.  At the time of writing, the petition had 25,357 signatures.
As I understand it, employees are allowed a reasonable amount of time off to deal with an emergency involving a dependant, including leave to arrange or attend a funeral. A ‘dependant’ is described as a spouse, partner, child, parent or anyone living in the household.  While I will be the first to acknowledge there are many people who love their pets, with some more than people, who will be upset when they get ill or die; I would caution creating any legal rights to pet bereavement leave. There is already a large number of workers’ rights for paid and unpaid leave that creates operational and fiscal costs to businesses.  Legally extending this to pets is a step too far as it would be exploited.  Where do we draw the line? Will all pets be acceptable, or just some? Will it be only adults or will children be allowed time off school because a beloved pet has fallen ill or died?  That’s not to say compassionate leave for a dead animal cannot be granted in certain circumstances.  For example, a blind employee whose guide dog has died is a perhaps one such circumstance. However, like most things, there needs to be a sensible balance of compassion, rights and responsibilities on all sides and badly drafted legislation is not the way to achieve it.

The fact that no justice system is 100% accurate is why I no longer support capital punishment. My view is that innocent people murdered by killers released early from prison is really no different to those wrongly executed from a miscarriage of justice. There is perhaps one solution that could offer reassurance to both sides and that is to do what was proposed when capital punishment was abolished in 1965. Namely jail indefinitely killers who would have previously been executed.
Thirdly was the news that the Commons Transport Committee said the Government should consider making hands-free calls on mobile phones a criminal offence with fines of at least £200 and six penalty points on a licence.  Citing research that ‘cognitive distraction’ from hands-free calling made it four times more likely a driver would crash, the same incidentally as with a hand-held call.  Naturally, this led to a backlash with many commenting that the distraction of using a hands free mobile phone is no worse than being distracted by say, talking to passengers or singing along to music on the radio. It’s understandable MP’s are wanting to act given that, according to government statistics, in the past two years alone, there have been 331,371 casualties on our roads of which 3,575 were fatal.  These are big numbers and if it were anything other than driving, I wager there would be a massive public outcry demanding something be done. While it is true that mobile phone use, along with drink driving, is a major factor in many fatal accidents, there are plenty of others too, such as aggressive speeding, worn tyres, faulty brakes and defective lights to name just a few. My view is, rather than pick on specific elements of driver behaviour there needs to be more focus on overall driver accountability and responsibility to ensure those who drive do so with more ‘due care and attention.’ For far too long, people have become complacent to the point that road casualties have almost become the accepted norm in society.  Well, I believe that needs to change.  We don’t expect the pilots of ships and aeroplanes or the drivers of busses and trains to transport us in defective vehicles or control them without due care and attention.  Indeed, in those few instances where they have crashed causing fatalities, many have been charged with manslaughter.  So why should private car drivers be any different?
Finally, Ofcom has decreed racist and promptly banned the acclaimed 1969 chart topping song ‘Melting Pot’ by ‪Blue Mink after receiving a single complaint.  If, as a society, we are to now censor artistic work based solely on it being disliked by a single individual we are, in words of Dad’s Army’s, Private Fraser, “Doomed.” 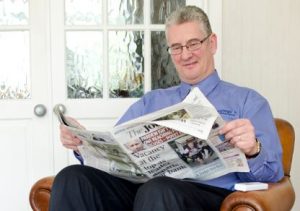 This article was first published in the Newcastle Journal on the 5th September 2019.